Agde on the Canal du Midi, and Cap d'Agde on the Mediterranean, near Beziers, Montpellier, South France.

Yachts entering the port of Cap d'Agde, with Fort de Brescou to the left.

Agde, is on the river Herault, 2 kilometres from where it accesses the Mediterranean sea. It is also on the Canal du Midi, a world heritage site, a canal that created a water trade route between the Atlantic and the Mediterranean, via Toulouse, Carcassonne, Beziers, Agde, and Sete.

Several archaelogical sites have shown neolithic and even paleolithic habitations dating back 1 million years, in the immediate vicinity.

Agde, one of the oldest towns in France, dates back to 575 BC, when it was a Greek colony - and has as its symbol the bronze Ephebe of Agde, from 4th century BC, a bronze statue that was found in the sands of the river, from a ship that went down on its way to a villa near Narbonne.

The town, has a nick name as "The black pearl of the Mediterranean" because of a number of local buildings built from basalt, that comes from the volcanic rock in the area.

The fortress church (Cathedral) of Saint Etienne dates back to the 12th century, is made completely from black basalt lava, from quarries at Mont St Loup.

As a contrast, marble from Caunes-Minervois, has been used for the 18th century altar. The town was a bishopric since 500 AD. The church replaced a 9th century Carolingian church, built on the foundations of a 5th century Roman church, that was formerly a Temple to Diana.

Sadly the adjoining cloisters of the cathedral were demolished in 1857. The last bishop of Agde was guillotined during the French Revolution - his name was Charles-François-Siméon de Rouvroy de Saint-Simon de Vermandois de Sandricourt.

Throughout the years commerce has come from the mix of grains, olive oil, basalt (for wheels), wool and wine.

During the dark ages, the town was taken by the Saracens in 725, by Charles Martel, Charlemagne's grandfather in 737, the Vikings in 859. Later it became ruled by the Trencavel family, and after the Cathar Crusade, the kings of France.

Cardinal Richelieu, in 1630, ordered the creation of a large port at Cap d'Agde to join with the Isle of Brescou, which on his death the project was abandoned, only one third of the pier had been built. In 1675 the Canal du Midi was built, connecting Beziers with the Etang de Thau; one year later the Agde round lock was built, allowing for 3 waterways to connect. It was officially opened in 1682.

In 1710 Britain briefly captured the town of Agde, before being overtaken by French troops for Roussillon.

After the revolution (1790), the railway between Bordeaux and Sete (1858), and the subsequent railway station at Agde, opened up the market for wine, promoted even more by a minor railway line (closed in 1952) via Meze, Marseillan, Florensac, Pomerols, and Pinet.

At the same time as the railway, the port of Agde, became of less importance than Sete, which was deeper so steamships could arrive.

In the dark years of 1939 - 1944 there was an internment camp built at Agde. First came in 1939, 24,000 persons came escaping the Spanish civil war. Then in 1940 it was used for the demobilisation of Slovak and Czech soldiers who were fighting the Germans. It then became a recruiting center for the Belgian army; but after the surrender of Belgian, these persons were interned, and later released. At the end of 1940 the Vichy regime made it into a foreign reception center - including 30 nationalities, as well as 1000 foriegn jews from the Herault region. In 1942 the german army occupied the town, and fortified the coast with bunkers. The Germans departed August 21 1944.

In the 1960's the coast line of the Mediterranean became at the frontline for Tourism, with the construction of sea side resorts and palaces, that included Cap d'Agde. Indeed in the mid 1950's the Otra brothers, noticing the frequency of naturists or nudists visiting the beaches through the dunes, on their land, their olive tree orchards, created a camping and caravan club, that became popular with naturists from Germany and Holland. This has become through time the mega nudist resort that brings in 50 000 visitors in the Summer months, to a resort with shops, restaurants, banks, clubs, and of course beaches where clothed persons dare not cross. There have been complaints that what used to be a family pursuit, has now become upset by swingers and the like, who have besmirched the original ethics of nudism.

The majority of Cap d'Agde is clothing orientated - normal public areas with normal mores. The town is lively throughout the year, with restaurants, a large marina, bars, clubs as well as the lots of great walks and beaches.

Places to see and discover:

14 kms of white sandy beaches, boasting over 300 days of sunshine a year, that include 12 supervised beaches.
The beach at La Tamarissiere, where there is a 200 year old pine forest, beautiful fo r exploring.

Le Grau d'Agde - the traditional fishing village of Agde, at the mouth of the River Herault. 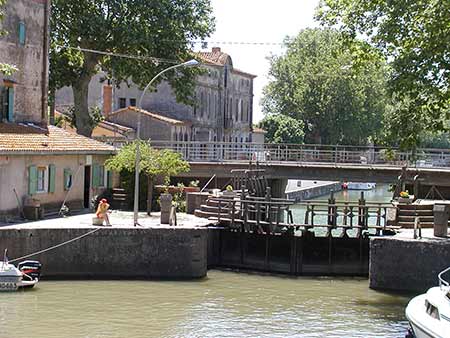 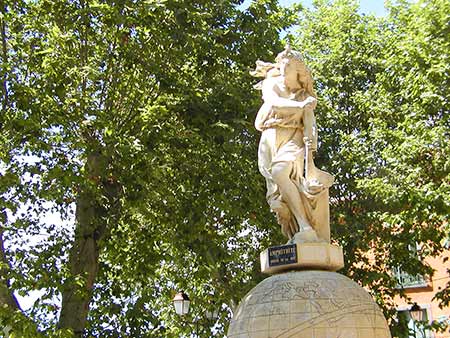 The statue of Amphitrite, Godess of the sea, and Poseidon's wife originally from Paris (Trocadero) 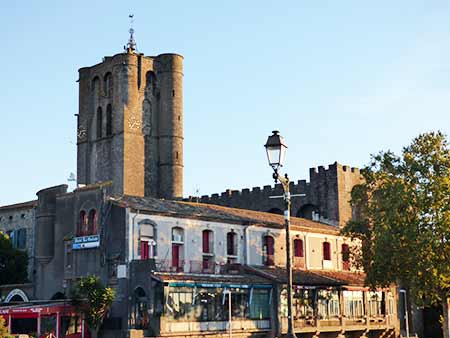 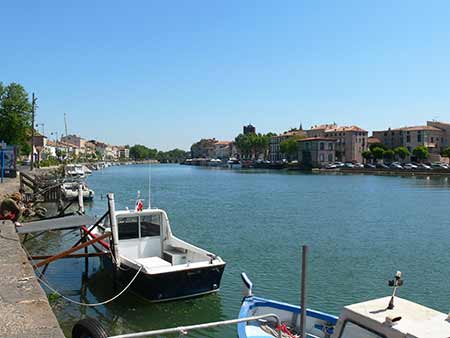 Agde on the river Herault 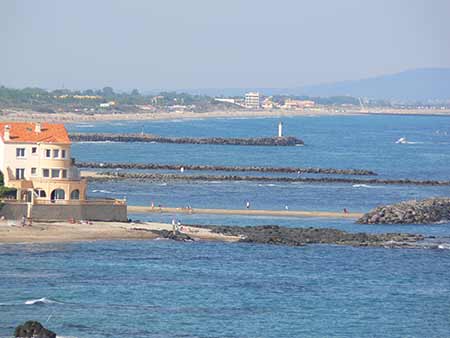 
Visit Agde and Cap d'Agde near Beziers, Montpellier, and Narbonne