The Canal du Midi at Pechlaurier, near Homps, and Argens- Minervois. Languedoc. South of France


The Canal du Midi hugs the steep cliffs of Pechlaurier, a short distance from the River Aude, amongst the vineyards of Languedoc 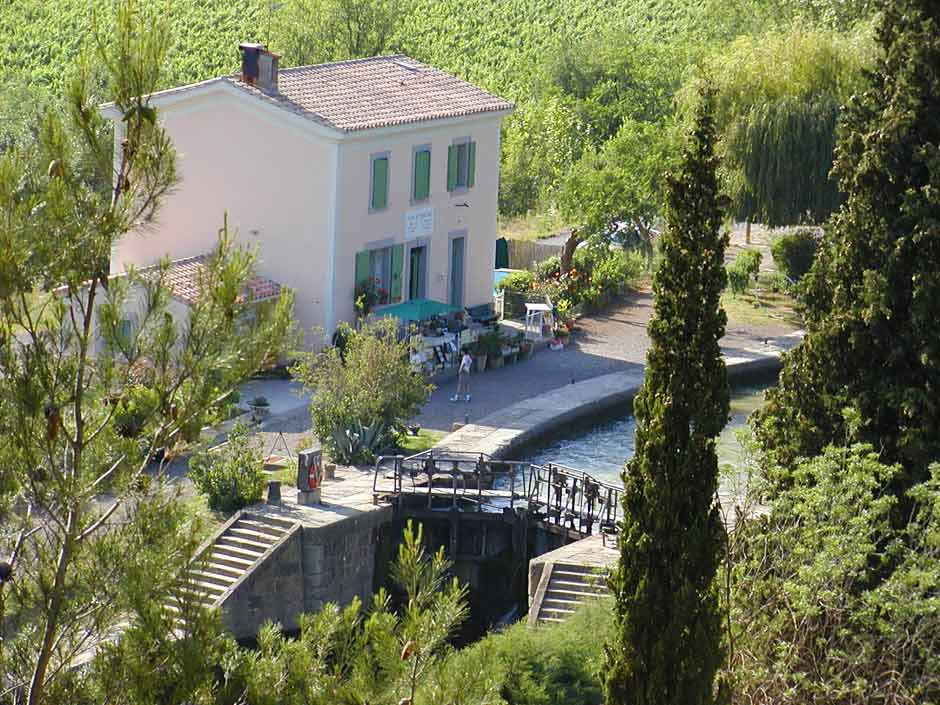 The ecluse (lock) is between the villages of Argens and Homps in the Minervois wine region, on the Canal du Midi between Carcassonne and Beziers.

THE CANAL DU MIDI HUGS THE MINERVOIS HILLS NEAR HOMPS

The Canal du Midi skirts Pech Laurier, a pretty hill, with pines, cliffs, and vineyards that over looks the castle topped village of Argens-Minervois, and a large lake, that is now used for sport fishing.


Argens Minervois dates back to the 4th century AD with the oppidum of Mourrel = the hill of Pech Laurier (fourth century BC) straddling the Towns of Argens and Olonzac. The village was originally called Arsegii Villa (881) getting its name from geology composed of sandstone and clay (Argilla in Latin). Owned at one time by the Archbishop of Narbonne, it suffered at the hand of Simon de Montfort, in his crusade against the Cathars, who gave it in fee to one of his lieutenants. It is then sold in 1356 to pay the ransom of Jean le Bon prisoner of the English. By 1722, Antoine de Niquet, Speaker of the Parliament of Toulouse takes possession. In 1940, the family Segonne acquires the largest portion of the land and the castle and its dependencies.

The nineteenth century saw the village grow significanly in population due to the development of modern viticulture, at which time the castle was significantly altered. It was at this time that the present parish church of Saint-Roch was constructed, a previous church had been in existence since the 11 th century, its old walls still showing in the local cemetary. Located at the foot of the old village on the way to the cemetery is the old community well that was used to supply drinking water to village of Argens Minervois. To the north-east of the village, the remains of the ancient irrigation system dating from the nineteenth century. A tower is visible on the path near Lake Agulhas. An old tile factory is seen in the remains of an ancient kiln - a business that was closed during the first decade or so of the 1900s.

Homps, now a lively boat rentals base and tourist center with a number of restaurants along the canal, developed rapidly from Gallo Roman times to becoming a thriving and prosperous town during the 17th century. It was at one time under the proprietorship of the Hospital of the Order of St. John of Jerusalem. After the completion of construction of the Canal du Midi in 1681 Homps experienced considerable economic growth. Homps actually became not only the third port of the Canal but also one of the few where the barges could operate and turn around. The surrounding vineyards, fed this trade and contributed to the development of the village. For many decades boat were loaded with barrels and barrels to be destined to the major ports of Bordeaux, Toulouse and Sète.

Whats else to see: Romanesque chapel of St. Michael the eleventh century built by the Hospitaller Order of St John of Jerusalem. Commandery of the Knights of Malta. Port for Boat rentals and pleasure boats on the Canal du Midi. Nearby Lake Jouarres - for water sports, swimming, sun bathing.

Local Wine Domaine to visit near the Canal -
Chateau Tourril

La Couvertoirade. A Knights Templar Fortified Town
or
Languedoc: Minervois in the Autumn