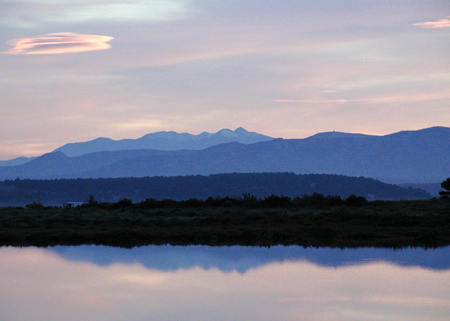 Canigou and Pyrenees as seen from near Gruissan, Languedoc

There is a lovely walk near Gruissan, 5 minutes from Narbonne, near Domaine De L Eveque, the home of Pierre Richard, a famous French comic film actor best known for his role in Le Grand Blond Avec Une Chassure Noire (The Tall Blond Man With One Black Shoe) (1972) and it's sequel. The walk skirts the beautiful Etang de Bages, with views across the bay to the Pyrennees, Canigou, and the Corbieres. Flamingos and all nature of wild life can be found, providing breathtaking experiences.