On the river Cesse, near Minerve, Olonzac, Ginestas, and Canal du Midi, Aude

This popular village, particularly known for its river swimming, and various events throughout the year, has a good selection of restaurants, small shops, and historic sites to visit. It is one of the quitessential Minervois villages to visit, especially during Mardi Gras or the Olive Festival in the Summer.

The village was first mentioned in 911; but really its history is much older - as the nearby caves at Les Grottes du Moulin attest. In fact you can see a replica of them at the museum in Narbonne. It was here in 1827 that Paul Tournal, discovered that the caves had been occupied by Neandethal man, and later Cro-Magnon, and it was in the Neolithic era that man began to seek shelter away from the caves. The caves are now for the most part closed, to protect the habitat of bats.

Between the caves and the village of Bize, is the ruins of the Tour de Boussecos, that dates back to visigothic times, (or even earlier 1000 BC, wnere neolithic pottery fragments, as well as bronze age arrow heads were found nearby). This "Close Encounters of a Third Kind" outcrop, has recently been tidied up by the proud locals of Bize, and has been part of festivals.

Betwixt is the stream known as the "Douze" that runs from the grottos, and is reputed to be 12 degrees centigrade? The river Cesse that runs through the village, is a popular spot for swimming, sun bathing, and related activities, has water all year round. (In other areas of the river, the river bed dries up, in Summer and also in dry years in Winter). During the Olive Festival and the July 14 National Holiday, it becomes the backdrop to impressive firework displays. In some years it also has become a motorcyclists draw with motorbike extreme sports, as some of its best protagonists try out their skills higher up the Cesse valley near the Cathar village of Minerve. 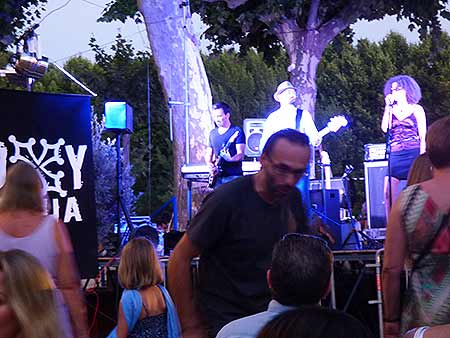 
It comes as no surprise that there were a number of Roman villas, above what is now Bize Minervois, and perhaps on one of your walks in this lovely part of the world, you will come across a dropped coin by one of the centurions, named "Bisus" who came here to retire!

At the center of the village is the Eglise Saint Michel (18th Century), with marble decorated interior, with impressive altar; the old chateau, that has been swallowed up by village houses near the church and bakery; Le Tour d'Attila, which provides a picturesque exit to the river from the center of the village; the Beal - irrigation stream that fed both the gardens, and once the mills that were numerous here. Indeed the most famous, Logis Colbert, now a hotel/gites/apartments, manufactured flags and military cloth until 1789.

There is a market on Wednesday morning, with a surprising mix of produce and products.

People from Bize used to be known as Monsters in days gone by - due to a wild night of partying during the feast of Saint Sylvester, when street lighting was extinguished at midnight, and bands of people would clatter metals making a horrific noise!

Nowadays you can feast, wine and dine, and even party at a number of restaurants and bars in the village.

Cafe du Midi, restaurant in the center of the village, with inner courtyard - excellent food.

Safran de Bize - a wonderful place to discover safran and other wild herbs and their tastes and healing qualities!

At Cabezac - in the commune of Bize Minervois:

Visit the Oulibo, world renowned olive mill, with excellent shop and interactive museum. Good to visit during Olive festival, or during the olive harvest.

Take a lovely walk to the ruins of the Saint Martin Chapel that originated in the 5 th century, on the way to Mailhac. It now has Carolingian vestiges, - it was last in use during the 16th century.

Or the way to Villespassans seek out the trembling phallic monolith of Roc Tremblaire - known to make marriages and has an obvious fertility role. 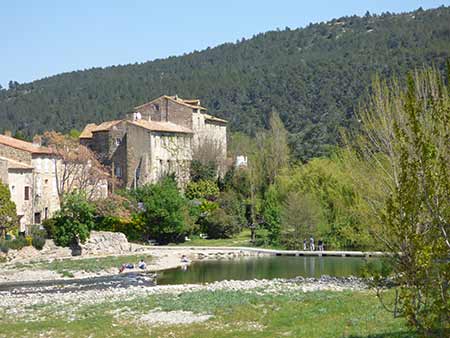 Logis Colbert on the river Cesse at Bize Minervois 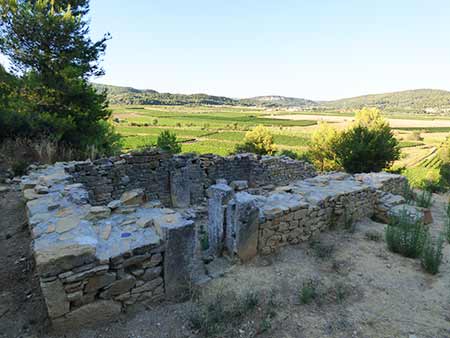 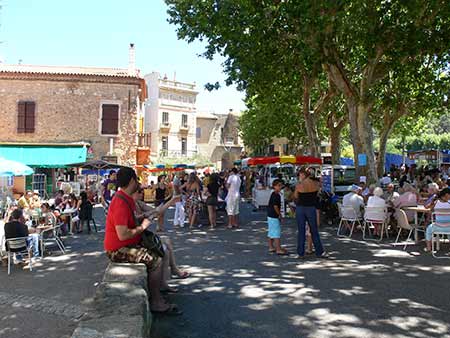 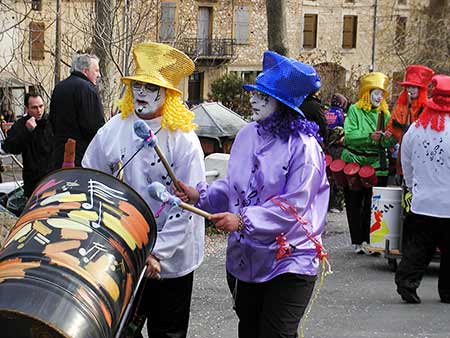 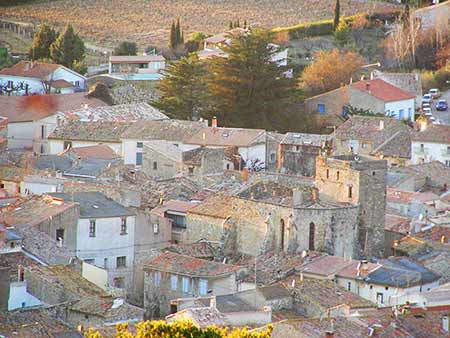 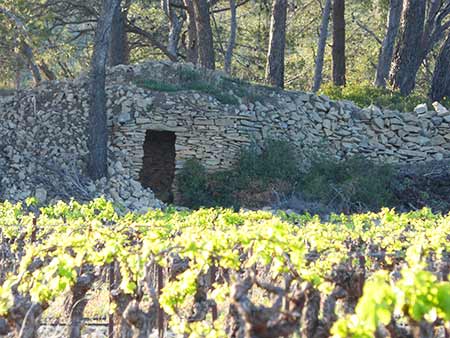 In a vineyard near Bize